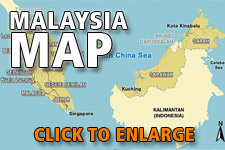 Malaysia is located in the southeast of the Asian continent; therefore this region is often referred to as Southeast Asia. There are over 28 million inhabitants in the country (January 2012). Malaysia consists out two parts: Peninsular Malaysia, located between Thailand in the north and Singapore in the south, and the two provinces Sabah and Sarawak, located on Borneo. We also talk about Peninsular Malaysia and Borneo. Peninsular Malaysia is located just above the equator and Borneo just beneath it. The large island Borneo is shared with Indonesia (they call this island Kalimantan) and Brunei. To the north it borders the Philippines (that still has claims on parts of Borneo) via sea. The capital city is Kuala Lumpur, a metropolis with over 1.6 million inhabitants in the city center (suburbs like Subang, Petaling Jaya, Ampang Jaya, Alor Setar and Klang are not included).

Malaysia is one big pristine jungle 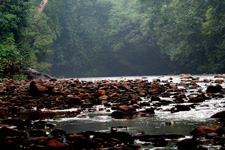 More than half of the country's surface exists of jungle. The national park Taman Negara contains one of the world's oldest primary rainforest. Especially along the west coast of the Malaysian peninsula a lot of forests have been cut down, not only just because the largest part of the population lives there, but also to make space for palm oil plantations and rubber trees. The same thing has been going on for years on Borneo; here mainly the province Sabah has to pay for it. Especially in the area along the Kinabatangan River, just a narrow stretch of rainforest remains, the rest is almost completely chopped for palm oil plantations and bio-industry. The fertile Malaysian soil is mainly suitable for oil palms, tea - and cocoa plantations and rubber trees. This makes Malaysia one of the main suppliers of palm oil, tea and rubber worldwide.

Earthquakes, volcanoes and flooding in Malaysia 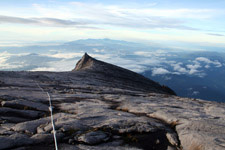 There are no active volcanoes in Malaysia. Earthquakes are occasionally felt but usually don't take place on Malaysian grounds. Every now and then Malaysia is hit hard by flooding because of heavy downpour due to the monsoon season. During this rainy season flooding is particularly bad in the northeastern parts of Peninsular Malaysia. We have also experienced flooding in the western parts of the peninsula; during a visit to Langkawi Island we couldn't go anywhere because of the heavy flooding (cars were almost swept away). Kuala Lumpur occasionally has to deal with flooding; but after the construction of the huge SMART tunnel (with the option to handle excess water) problems due to flooding were much less. The west coast of the peninsula characterizes itself with a lot of mangrove woods and flat areas; the east coast by the many beaches, the inland consists mainly of mountains and jungle. On the island Borneo in the state of Sabah Malaysia's highest mountain is found; Mount Kinabalu. The top is approximately 4095 meters high. Climbing this mountain is possible, but from own experience we can tell it is not an easy climb. However, views from the top are breathtaking and will give you memories that last a lifetime.