History and historical facts of Malaysia 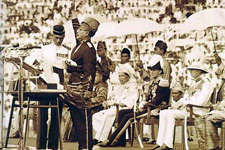 About 10.000 years ago, the Orang Asli (comparable to Malay Aboriginals) left from southwest China to the peninsula we now call West-Malaysia. Until 1405 the following superpowers reigned over the peninsula; the Funan (Cambodia), the Srivijaya (Sumatra) and the Majapahit (Java). From 1405 onwards the Chinese influence in this area grew. In this period the Islamic way of thinking also set in when Arabic traders arrived. In a short period of time many people converted to this religion. From 1500 on the trade in Southeast Asia increased enormously. The European superpowers of that time acquired interest in the local resources, the era of trade over sea had started and Malaysia would play a big part in it. 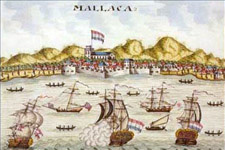 The Portuguese were the first to occupy Malacca (partly due to its perfect location). During the VOC-era (later the Dutch East Indies era) the Dutch seized power in Malacca in 1641. At first, the British didn't put much effort into Malacca, and established themselves on the island Penang (1786). Only until 1795 the British took over command of the Dutch in Malacca, who started focusing more on trade all around Indonesia. It is said the Dutch traded 'Malaysia' for 'Indonesia'. The British Crown Colony (also referred to as the Straits Settlements) was established in 1826 and slowly but certain, the British increased their power over the rest of the peninsula. At first, it was primarily spices taken from the present Malaysia. But when in the early 19th century tin supplies were discovered, the trade shifted rapidly.

The British first colonized the peninsula and after that, between 1840 an 1882, also annexated east-Malaysia (Sabah and Sarawak) into the British Crown Colony. In this period, the British also invited many Indian people to Malaysia, to fill up the shortage of workers. After the Japanese occupation during World War II, the strive for independence grew among Malay people, this lead to a communist insurrection (1948-1960); 'The Emergency'. In 1948 the Federation of Malaya was founded. The Federation consisted of 11 states; nine Malay states and the British settlements of Penang and Malacca.

In 1948, an undeclared war on terror exploded in the jungles of Malaya. British and Malayan security forces fought a formidable guerilla army determined to create a Communist republic. They failed – but by the time the war ended 12 years later, tens of thousands of people had been killed, both combatants and civilians. Yet against this terrible background, Malayans from all races and classes joined together to form a new nation – independent Malaya. The Malayan Emergency was an education in fighting together – the crucible of independence. 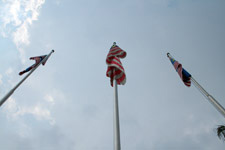 In 1957 the British surrendered their sovereignty over Malaysia and the peninsula became independent that year with the name 'Federation of Malaysia'. A new federation with the name Malaysia was established on September 16th 1963 by the unity of Malaysia, Singapore and the east-Malaysian states Sabah and Sarawak on the north coast of Borneo. Directly after this, the Filipinos and Indonesia broke all their diplomatic relations, because they believed that some of these parts belonged to them. Indonesia started with the konfrontasi (confrontation); fishing-boats in front of Sarawak's coast were brought to sink and above Sabah the roaring of airplanes could be heard. But after Soekarnos disposal in 1966, the government made a treaty of peace with Malaysia and after that the Filipinos dropped their territory claims on Sabah too (though up to this day there is still an interest in the northern parts of Sabah).

In 1965 Singapore separated from the federation and became an independent state. The sultan of the oil state Brunei (located between the federal states Sabah and Sarawak), already made clear in the past that they opposed to any kind of unity with Malaysia.

The anti-government rallies of 2007

After the declaration of independence in 1957 Malaysia has developed itself quickly. With the 'Vision 2020' strategy carried out by former premier Mahathir, Malaysia jumps ahead as a economically and technologically well developed country. Last couples of years have been dominated by political disturbances. Two unauthorized anti-government rallies shook Malaysia's fundaments in November 2007. The first rally was organized to protest over corruption in the Malaysian electoral system. The second rally was organized by the Hindu Rights Action Force, to protest over discrimination against non-ethnic Malays (mainly Indian immigrants). Both rallies were condemned by the government and were put down fierce by the police. However, these rallies were the start of more political shifts.

In March 2008 the biggest political party - Barisan Nasional (National Front) - in Malaysia experienced the biggest electoral loss ever in the country's history. This was a clear message addressed to Prime Minister Abdullah Badawi. A couple of weeks later the UMNO (part of Barisan Nasional) gathers to demand resignation of Abdullah Badawi. Former Prime Minister Mahathir is suspected to play a big role in this turn of events. Abdullah remained confident he was still the one to lead BN to better times.

Not long after these events former vice Prime Minister Anwar is free to join politics, after a 10 year ban of any political activities (due to acquisitions of corruptions and sodomy). He was the next Prime Minister in line after Mahathir, but due to his conviction Mahathir was succeeded by Abdullah Badawi. In May 2008 Mahathir leaves 'his' UMNO, to leave yet again a clear message. His actions are - unfortunately for him - not met with his hopes to cause a rift in the UMNO.

In June 2008 the Malay government raised fuel prices by 41% (Diesel to 63%), which causes sparks of anger throughout the country. Abdullah receives much criticism from out of his own party. As a result he decides to resign as Prime Minister, although he does not mention further details around his resignation. Soon after this it is clear that Najib Tun Razak will be the next Prime Minister of Malaysia (son of Malaysia's 2nd Prime Minister; Tun Abdul Razak). In July 2008 Najib Tun Razak is mentioned in connection with the death of a former top model. No action is being taken, although he was under investigation for a short while. Main political rival, Anwar, also appears in the spotlight. He is again being accused of sodomy, this time a 23 year old co-worker makes the allegation.

In April 2009 Prime Minister Abdullah Badawi resigns from politics, soon after Dr.M (Mahathir) joins UMNO again. Malaysia's new Prime Minister is Najib Tun Razak. He promises many changes, the question is whether he is capable of really taking Malaysia to the next level. He has the difficult task to make 'his' 1Malaysia happen. 1Malaysia is an on-going campaign announced by Najib calling for the cabinet, government agencies, and civil servants to emphasize ethnic harmony, national unity, and efficient governance. The eight values of 1Malaysia as articulated are perseverance, a culture of excellence, acceptance, loyalty, education, humility, integrity, and meritocracy. There will be new elections early 2013. Then we will see if Prime Minister Najib did enough to convince and please the 'Raykat' (the People).

In July 2011 a movement comprising of many organizations called Bersih 2.0 made plans to organize a demonstration in Kuala Lumpur to protest for fair elections during the upcoming elections. The government deemed the group illegal and bersih organizers did not get a permit which they needed to demonstrate. They did not gave up and proceeded with the preparations. At some point even the King played a part in the developments, advising government and bersih to come up with a peaceful solution. Both agreed, but soon after the government again dissalowed Bersih 2.0 to take place. The government put Kuala Lumpur in lockdown at Friday 8th of July midnight. At 9 July 2011 most of the roads leading to KL were blocked, people were frisked and car trunks were checked. Nonetheless well over 20.000 demonstrators made it into the city center before 11am. Even numerous opposition leaders made it to the meeting points, ignoring the fact that they were put on a list with people that weren't allowed in the city that day. Around 1pm the rally towards Stadium Merdeka started, but crowds moved slowly because of all the road blocks set up by police and special units. Things turned sour at 1.30pm when police starting to use water cannons and tear gas on the crowds. Around 4pm demonstrators declared Bersih2.0 a succes and the city turned back to normal