The Asian elephants face extinction for years now. Numbers in Malaysia (including the Bornean Pygmy sub species) are estimated below 3.000 in total. There used to be large numbers of elephants in Malaysia, but that amount has dropped enormously over the last 25 years. The biggest threat the elephant population in Malaysia faces is the massive clearance of the rain forests. Elephants used to have many thousands of sq km2 of rain forest where they could roam free. Now Peninsular Malaysia is developed with many roads, villages, cities and especially palm oil plantations; which limits and destroys the elephants' natural migration path.

As the natural habitat of the elephants grew smaller and smaller, numbers of conflicts between human and elephants were on the rise. In an answer to that Malaysian authorities set up the Elephant Management Unit in 1974 under the authority of the Department of Wildlife and National Parks. This unit is located at the first and biggest elephant sanctuary in Malaysia; the Kuala Gandah Elephant Conservation Centre. People there have become highly specialized in elephant relocation, moving elephants to the eastern Malaysian states of Kelantan, Terengganu and Pahang where there is still a large amount of forest, some of which is protected as part of the vast Taman Negara National Park.

Currently two main elephant centers can be visited by tourists; the very popular Kuala Gandah elephant center and the Sungai Ketiar center. Kuala Gandah is very popular among tourists; mainly because it is only a two hour drive from Kuala Lumpur by rental car. Sungai Ketiar is less popular due to its remote location northwest of Lake Kenyir in the state of Terengganu. Both sanctuaries respond to elephant alerts and relocate captured wild elephants to their new habitat within the big national parks (mainly in the center of Peninsular Malaysia). The people that work at the sanctuary (most of them are volunteers) also track down and capture hunters and poachers to bring them to justice (a dangerous job); though unfortunately local laws are not severe enough to really make a difference. Below the links to our pages on the two Elephant Sanctuaries. 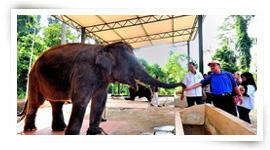