Malaysia is a tropical holiday destination, where temperatures fluctuate between 25 and 35 degrees during the year. It is usually very hot and humid, especially in the major cities. Often due to haze warm air is trapped inside the cities, which results in very warm temperatures. It is less hot on the many islands surrounding Malaysia, mainly due to the cool breezes. It is also less hot in the 'highlands' of Malaysia; here you can enjoy cooler temperatures that never exceed 25 degrees. Between mid-October and the end of March the climate at the eastern side of the peninsula is affected by the rainy season or monsoon season. Weather usually is very rough in these months, for this reason it is not the best time to visit these parts of Malaysia. There are some tropical islands (i.e. Perhentian, Redang and Tioman) that 'close' during the monsoon period. This means that resorts are closed, and ferries and boats do not bring tourists to the islands. During the monsoon period it can sometimes rain for days. This doesn't mean that you should avoid Malaysia during these months. All other parts of Malaysia are not affected by this monsoon, for example Penang, Langkawi and many other places on the western side of the peninsula are perfect for a visit. Same goes for Borneo.

But when does the east coast monsoon officially start & end?

Nobody can foresee the exact time the monsoon season will start or end. One year you will notice it started already at the beginning of October, the next year it is still sunny in early November. Sometimes it starts mild and ends ferocious, other times the first few months are the worst. As there is no telling up front if you will still be lucky when you head over to the islands at the east coast; it is perhaps best to contact a few resort operators just a week or two weeks beforehand to ask if they think they will still be open for business. Resort owners obviously do not want to close down for the monsoon season, so if they can stay open a bit longer they most definitely will. Same goes for the end of the monsoon season; also just contact resort owners and ask them if they are open for business (around the beginning of March). Between May and October there is officially a Southwest monsoon (affects the western part of the peninsula), but in most cases you will not notice that much of it at all. Besides the monsoon period, it can always rain in Malaysia; it is after all a tropical destination. In contrast to rainfall in Europe or the US where it can - in some cases - rain for days, in tropical areas like Malaysia rainfall is generally short and violent. This means that almost every day it will rain very hard, usually at the end of the day around 16.00 until 18.00. Besides that, during the night it often rains too. Sometimes you can hear the thunder at night.

You can find the coolest places in Malaysia in the so called 'Highlands'. These highlands lie higher than the rest of the country, and because of this temperatures usually are noticeable lower. Examples of popular highlands are Cameron Highlands, Fraser Hill, Genting Highlands and the area near Gungung Ledang. Locals often retreat to these highlands to escape to hot and humid climate in the major cities. Residents of Kuala Lumpur usually retreat to Genting Highlands and Fraser Hill. People from Georgetown (capital city of Penang) usually head off to the Cameron Highlands. Another great place for some cooler weather is in the vicinity of Mount Kinabalu on Sabah grounds. The higher you get, the cooler it is. On the top of Mount Kinabalu it was 4 degrees at 8.00 in the morning, probably the coolest place in the country, except for the air conditioned shopping malls. 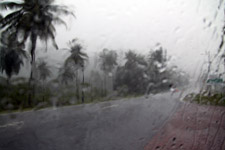