AirAsia is Malaysia's first and most popular price fighter airline. No other airline in Southeast Asia can compare with AirAsia's low ticket prices. AirAsia's famous mission statement is 'Now Everyone Can Fly', based on their goal to make local flights affordable for every Malaysian. That goal was reached faster then any other airline in the world. Within a couple of years AirAsia grew from a small airliner to the biggest airline in Southeast Asia; winning numerous international aviation prices. The LCC (Low Cost Carrier) flies mainly with the popular Boeing 737-300 and the Airbus 320. AirAsia flies to almost every destination within Peninsular Malaysia and Borneo (Sabah and Sarawak). Besides that the budget airliner also flies to numerous big cities throughout Southeast Asia and even to Europe and Australia. Main hub is Kuala Lumpur's LCCT (Low Cost Carrier Terminal) located nearby Kuala Lumpur International Airport. From the city center you can easily take a taxi or the KLIA Express to get to KLIA (and from there you can take a taxi or express bus to LCCT).

Some relevant points when flying with AirAsia

How to make reservations

To reserve a ticket at AirAsia you go to their website. First you select the appropriate language, followed by the flight details. Here you can select the departure and arrival city, and whether you need a one-way ticket or a return ticket. After filling in these details you can hit the search button. On the next page AirAsia shows all available flights to the city you chose earlier. Again, there are multiple classes, be sure to check the conditions of every class up front to avoid disappointments. After finding the flight, press the 'Confirm & Continue' button. In the following screen you are asked for all necessary personal details. After all needed information is filled in; you will be redirected to the secured payment page. Here you can pay with your credit card. After confirmation you will be congratulated with your (first) online AirAsia reservation. After some minutes you will receive a confirmation e-mail with your unique check-in code. It is enough to bring along this code, but it is better to print the complete confirmation page to be on the safe side.

AirAsia has many reservation offices and counters in Malaysia. You can find one at every airport in the country, but also in the bigger cities. In Kuala Lumpur for example you can find a reservation office at KL Sentral. (the main train station of Kuala Lumpur). Prepare to queue up when you visit this office; as it is always very crowded with people that do not own a credit card (so for them visiting the office is the only option to get cheap AirAsia tickets). 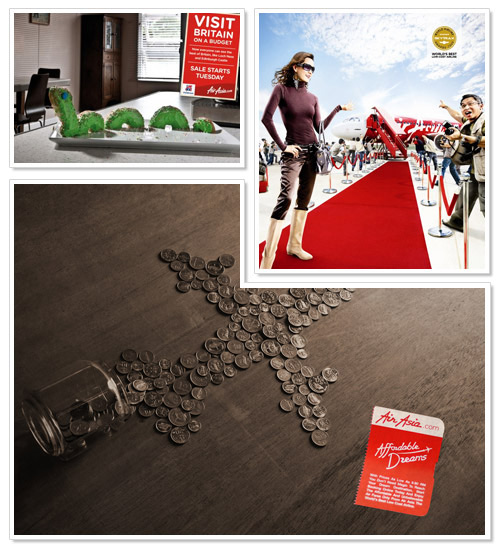 AirAsia's check-in counter always opens up two hours before your flight is scheduled to take off. From this moment on passengers can check-in for their flight. Remember; the counter closes exactly 45 minutes before departure. If you are too late, you cannot board the flight unless it is a case of emergency. Passengers need to be at the exact departure gate 30 minutes before departure. Always listen closely to the Airport Message Service; sometimes flights are delayed or gates change suddenly. During boarding woman, children and elderly people can get in the plane first, after that all other passengers may board the plane. Beware of the long lines; everybody usually wants to get in first, which can be quite chaotic at some times. We experienced almost every type of bad luck imaginable; we even missed one flight because it departed one whole hour early. Most of the times we departed in time. Overall you could say that you get what you pay for in terms of service. There is always a chance a flight gets delayed, or that two flights are combined into one. To many travelers this is all worth it as you often pay a very low price for your tickets.

AirAsia flies on many routes within Southeast Asia. As of 2004 they also fly to Bangkok and Macao, and many Indonesian cities. AirAsia even started AirAsia X; their international airline. With AirAsia X you can fly from Malaysia to numerous long distance destinations like Australia, Korea, Japan and even Europe. First European airport was London Stansted, followed by Paris (Orly). AirAsia X has plans to fly from and to many other airports within Europe; and they are also eyeing the US as possible next flight route.