The Grand Prix of Malaysia is an auto race competition on the beautiful circuit of Sepang, part of the world championship of Formula1. On the 17th of October 1999 Eddie Irvine won the first Grand Prix of Malaysia before his Ferrari teammate Michael Schumacher who came in second. From 2001 onwards the race moved to the start of the season, with race dates usually somewhere between the end of March and the beginning of April. 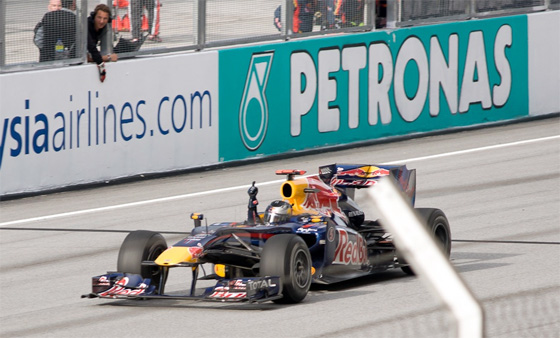 Personal experiences of the Formula1 Grand Prix of Malaysia

We have always enjoyed our visits to the Malaysian GP. Last time we went we bought tickets for the Main Grandstand. This was quite nice as we looked directly into the pit lane. We could also see the start from the other side of the Main Grandstand. The year before we watched the race from the K1 Grandstand, which was also awesome and much cheaper (as tickets often sell for less than RM300 if you buy them beforehand). The great thing about the K1 Grandstand is the perfect view on a couple of great corners; perfect for seeing the action up close (as cars slow down for the corners) and for making some nice pictures during the race. 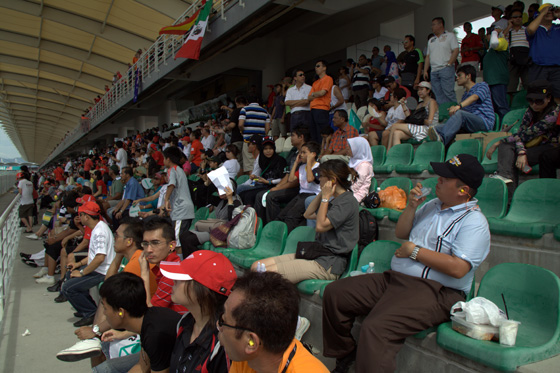 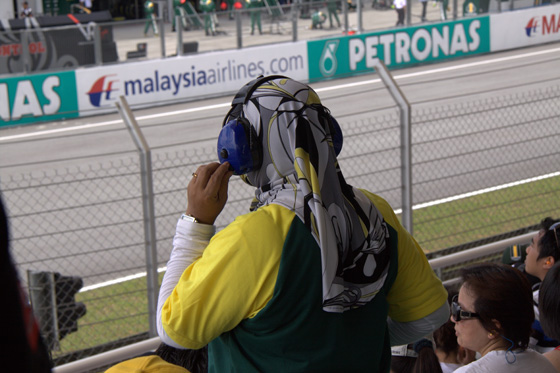 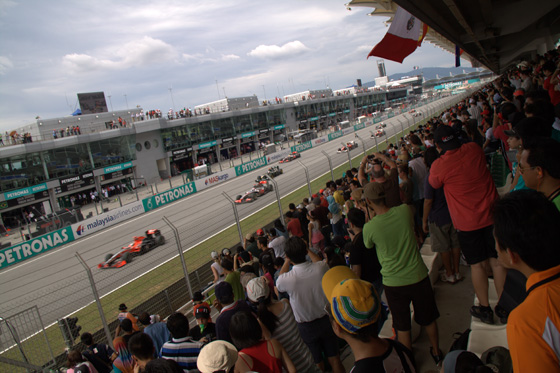 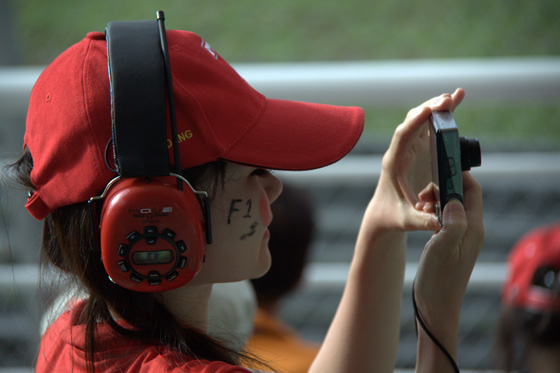 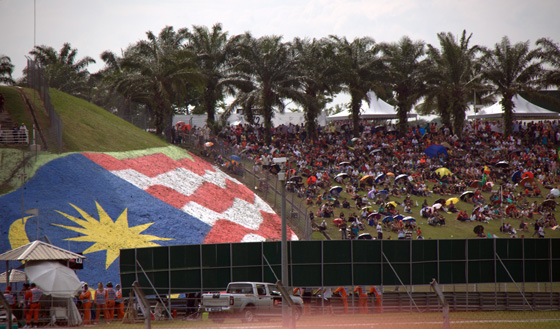 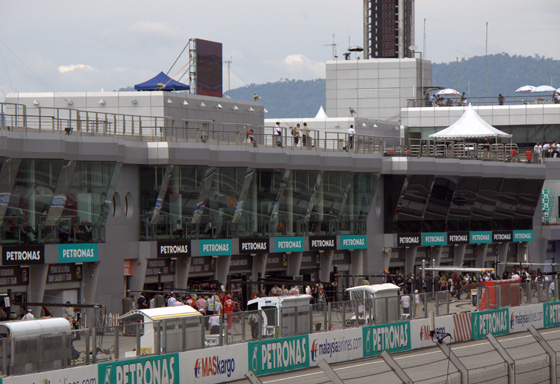 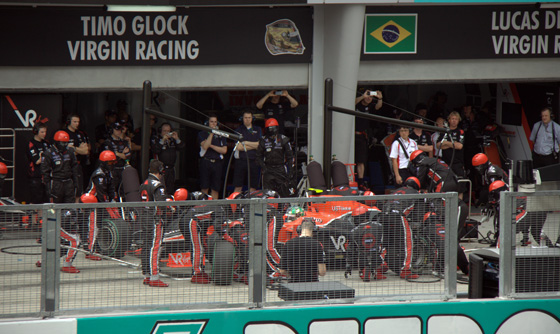 The Main Grandstand however is located within the mall area; where you can buy food, drinks and have clear views on multiple parts of the track (from many angles). We could even see the ceremony after the race from our seats, which was great fun but only possible if you have Main Grandstand tickets. 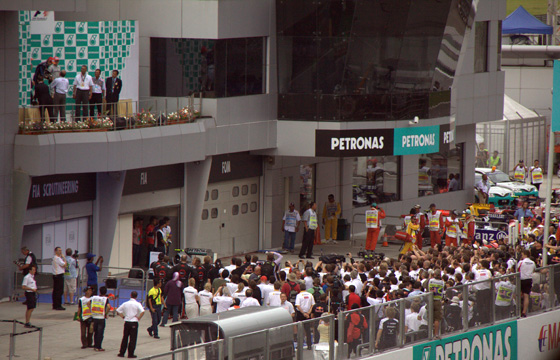 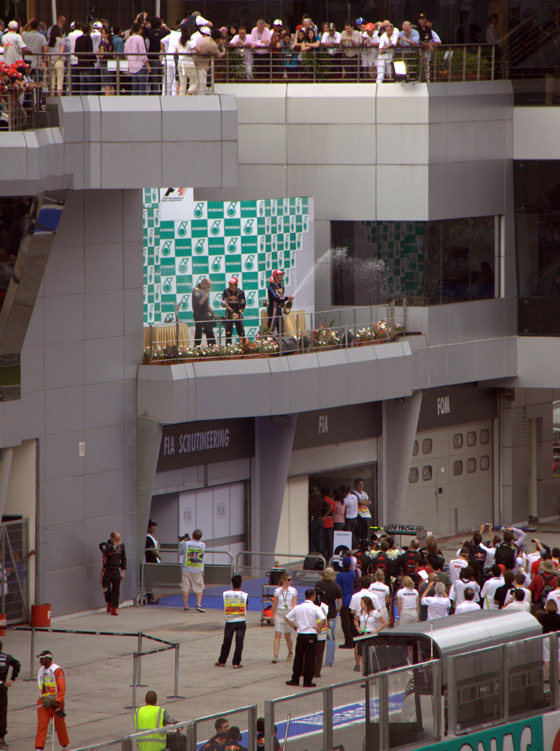 Hillstand tickets are the cheapest available, the downside however is that contrary to the other available options, the hills are not covered and the Malaysian GP is known for its rainfall during the race.

Video impression of the Grand Prix of Malaysia

Past winners of the Formula1 Grand Prix of Malaysia

Events in Kuala Lumpur during the Grand Prix of Malaysia

Long before the Malaysian F1 race weekend takes place many formula1 events take place in and around Kuala Lumpur. Well known companies often sponsor one or more formula1 teams and these companies organize events to get everyone in the right spirit before the race weekend. We attended the Petronas Pit Pulse VIP party once; a fantastic event with renowned DJ’s, many celebrities and even a appearances of Mercedes (test) drivers and team personnel. Other teams too organize great events. 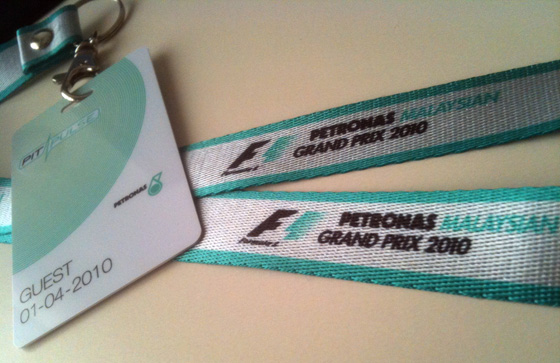 A great place to be at before the Formula1 race weekend (and during) is at KLCC Park. Here you will find many huge television screens. When you weren’t able to buy tickets, but still want to watch the race, make sure you check out the KLCC F1 event area during the race. In the days before the race you will have a change to meet drivers and witness press conferences.

Finding a hotel during the Formula1 weekend

Race fans that visit the Formula1 GP race of Malaysia have the option to stay in a hotel or guesthouse close to the race tracks, or in a hotel in the city of Kuala Lumpur. Normally it is much more fun to stay near the circuit, but in this case we advise you to find a hotel in the city center as there often are fun events held in this area. Hotels in the city center are all of high standards and if you make reservations beforehand, prices are quite affordable too (contrary to hotel prices during the Singaporean GP weekend, where some hotels charge thrice as much as their regular room price).

Popular hotels during the Malaysian GP

There are also many great value for money 4-star hotels in Kuala Lumpur, some at fantastic locations in the city center. The most popular 4-star hotels in KL are: Corus Hotel, Furama Hotel, Anggun Boutique Hotel, Fahrenheit Suites, Swiss-Garden Hotel, Melia Hotel, Piccolo Hotel, Concorde Hotel and The Royale Bintang.

Budget conscious travelers probably prefer a much cheaper place to stay. In certain areas in Kuala Lumpur there are many affordable guesthouses concentrated within one or more streets. A good place to find budget accommodation is around Bukit Bintang, around Chinatown and around Brickfields. Besides the cheap guesthouses there are also quite a few value for money 3-star hotels in Kuala Lumpur: Capitol Hotel, Radius International Hotel, Ancasa Hotel and the Citin Pudu Hotel.

Buying tickets for the Malaysian Grand Prix is actually very easy; you don’t need any ticket agency or travel agency to help you to buy them. You buy tickets yourself online, in a few simple steps you will have your tickets. Recently they even added a PayPal payment option to make it even easier to pay online. You can have the tickets send (secure) to your own address, or pick them up at a few collection points in the city or at the tracks a few days before the race.
Most expensive tickets cost over RM2000, while the cheapest tickets sell for RM63. If you order your tickets well beforehand, they are much cheaper as they often have special bargains that last until the 31st of December each year. We bought our K1 Grandstand tickets once during a promotion for RM300, while the normal price is RM600. We paid RM450 for our Main Grandstand Turquoise tickets (normal price RM900 at the time). 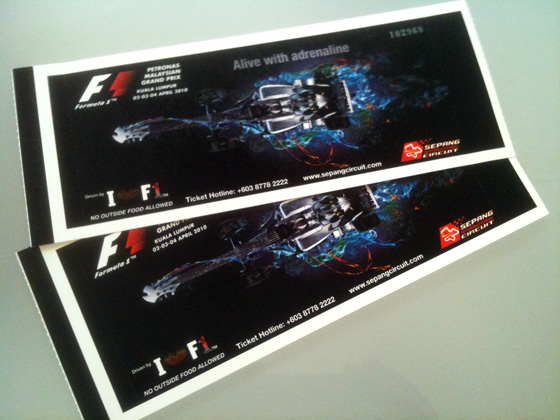 You can buy the tickets only at the official Malaysian GP (Sepang Circuit) website.

The Malaysian Formula1 GP of 2012 took place on the weekend of the 23rd, 24th and 25th of March. Lewis Hamilton won the qualifying race, before Jenson Button and Michael Schumacher. The race turned out to be spectacular. As usual the Malaysian GP turned out to be a wet race with plenty of exciting moments. Due to extreme wetness on the track the race was paused for 45 minutes, after that Fernando Alonso (Ferrari) emerged as race leader in the 16th lap and never gave up that position. Alonso won the race after 56 laps; he started on 8th position and had a great race start. Sergio Perez (Sauber), who started one place behind Alonso at the 9th position, came in second after an amazing race, followed by Lewis Hamilton at third place. Last years winner Sebastian Vettel came in 11th, after a disappointing race for Red Bull Racing.

The Malaysian Formula1 GP of 2013 will take place on the weekend of the 23rd, 24th and 25th of March. Tickets are available for online purchase via the official Malaysian GP website.

How to get to the Formula1 Grand Prix of Malaysia circuit

There are multiple ways to get to Sepang Circuit to witness the Malaysian GP live. Easiest is to check the SkyBus schedule and take the bus directly from KLCC to the main entrance. Be sure to not miss the last bus (usually around 12pm) as otherwise you will miss the race start. Usually there are a few places within the city center where you can hop on the bus.

Another easy option is to take a taxi or metro to KL Sentral, the main train station of Kuala Lumpur. Here you can take the fast train – KLIA Express – to the airport (KLIA). From here you walk to the bus station to take the bus to the tracks (you can take the bus that goes to the budget terminal LCCT and get off in front of the circuit).

Many locals visit the tracks by car which often leads to massive traffic jams. There is ample parking space available, but a parking ticket costs RM50 per car.

After the race it will be difficult to get a bus or taxi back to KL or KLIA. In the end we opted for a premier taxi that charged us RM150 to get us to KLCC. Normally we would refuse, but in this case we were glad we had a ride home as we heard later that some people only got back home after midnight.

Check out the .pdf “How to get to Sepang” here.

Over the years the GP of Malaysia has suffered quite some criticism, mostly caused by money, but also a bit by the declining image of Formula 1. The first F1 race in Malaysia was welcomed enthusiastically by the whole country. However, after a few years the number of visitors started to decrease. First solution was to lower ticket prices, but this didn’t help. Visitors still stayed away, and overall revenue was minimized because of the loss of several sponsors. Sepang Circuit is able to accommodate many thousands of race fans, empty seats are easily noticeable during the race. Viewers at home behind their television could also see this clearly. This led to even more negative publicity. At some point there was even talk of canceling the GP of Malaysia.

However, In 2007 a record number of visitors watched the race live from their seats at the circuit. Shortly after this race there came a decisive answer; the race would be driven in Malaysia until 2015. To attract even more viewers the start of the race has been moved to 4pm instead of 2pm, so more people (especially European race fans) will be able to watch the race live on television. In Malaysia it is not uncommon to experience heavy rains around 4pm, as a result the Malaysia Formula1 GP became known as a wet race with a lot of excitement. F1 drivers have always loved the Circuit of Sepang because of the broad lanes (which makes overtaking easier which results into more action during the race).

Map of the Formula1 Grand Prix of Malaysia

Check out the full screen version of the map of the circuit.