Today the much-awaited Klang Valley MY Rapid Transit (MRT) project was launched, to be completed in 2016. The MRT line will run over a distance of 51km (9.5km is underground), from Sungai Buloh to Kajang, cutting through Bandar Utama, Damansara, Taman Tun Dr Ismail, Kuala Lumpur city centre and the heavily-populated Cheras. Once completed, the MRT will benefit more than 10 million commuters in the Klang Valley. At least 50% of Klang Valley commuters are expected to switch to public transport by then. The line is operated by RapidKL. It will have multiple connections to existing lines (RapidKL, KTM Komuter and KL Monorail). 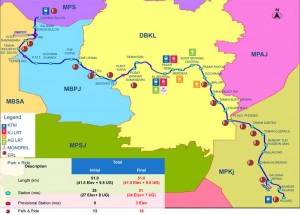 A logo design contest, which offers RM50,000 in cash prizes, has been launched to commemorate the event. The winner will take home RM10,000 while 20 consolation winners will be awarded RM2,000 each. The contest ends on Aug 3.

Check out this nice video:

This means that people are finally able to travel by MRT from KLCC/KL Sentral to popular shopping malls like The Curve and 1 Utama, and also along popular areas that are not that easy to reach by public transport. It will also transport people from outside of KLCC to the Bukit Bintang area in less than 40 minutes; no parking costs and less traffic jams when going into the city center during weekdays and weekends. Plans describe two stops along Bukit Bintang, one even near/below Pavilion KL; great news for weekend shoppers!