About 12 kilometers north of Kuala Lumpur, in the district of Gombak, the Batu Caves are located. The name originates from the river of Sungai Batu, which runs alongside the hill. The limestone Hindu temples are built in the cave, which is about 400 meters deep and 100 meters high. Via a stairway of 272 steps you arrive at the entrance of the cave. It is a beautiful sight from the inside especially when rays of sunlight come in from the roof of the cave, but maybe even more so when you look at the city of Kuala Lumpur from that spot. The caves were turned into a place of worship in the early 19th century by an Indian merchant named K. Thamboosamy. Local traders and orang asli already knew of the caves for many centuries.

Temples in the caves

In 1891 the first temple was built in the cave. The large stairway to the temple was built in 1920. The Cathedral Cave is the largest cave, and is filled with altars. In 2006 the construction of a 42 meters high statue of Lord Murugan was completed, when we were there the construction had just started. To learn more about the history of the Batu Caves, you can rent a headset for RM13. You will hear all the relevant facts concerning the temple. Currently a cable car is being built that will transport visitors and temple devotees to the top of Batu Caves without having to walk up the 272 steps. It is expected to be ready for public in 2012.

Yearly festivals at the Batu Caves

Every year a number of festivals/ceremonies take place in the cave, for example the Thaipusam celebration in January/February of the year (10th month of the Hindu calendar). It is a celebration for the youngest son of Shiva (Subramanian) and the unification of Pusan and the Brihaspati stars. More than a million Hindus come to this cave. In 2006 more than 1,500,000 Hindu pilgrims visited this celebration; this was one of the largest gatherings ever seen in history.

You might know the images of Hindus being hanged on hooks; self-punishment is an important part of Hinduism. The Hindus engage in self-punishment to force favors from the gods. To avoid the (touristic) crowds, it is advised to visit the cave on weekdays. In the weekends it is often filled to the brim with tourists. By the way, you have to watch out for the apes around the Batu Caves (macaques). These apes are extremely spoiled by tourists and become very aggressive towards the visitors because of this. They'll steal your bag, camera or food within a second, so always be alert. 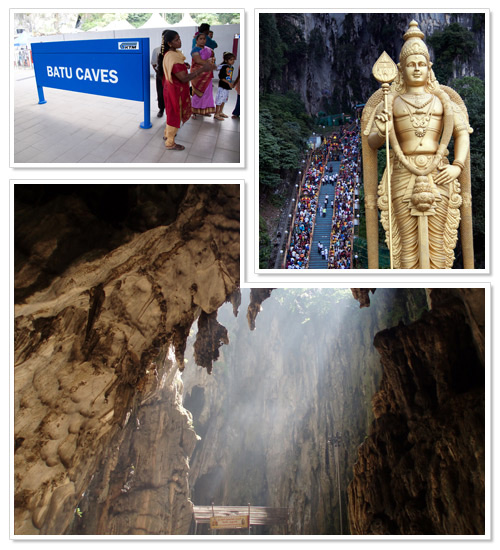 How to get to the Batu Caves

The Batu Caves are easily reachable from the centre of Kuala Lumpur. For RM20/RM25 you can take a taxi, when the taxi driver is driving on the meter it will be even cheaper. From the bus station Puduraya in Chinatown two busses also have a route to the Batu Caves, 11/11d and U6. The bus will take you to the Batu Caves in about 45 minutes. The easiest way is by taking the KTM Komuter train that goes from KL Sentral to Batu Caves station in less than 20 minutes. A ticket at KL Sentral will only cost you a few ringgits.

Map of the Batu Caves

Below you can see a map of the Batu Caves. You can simply scroll through the map with your mouse. Use the markers on the left to zoom in or out of the map.