A colorful history of Batik

The process of waxing and dyeing cloth is known as ‘batiking’. So, batik is actually a cloth that is traditionally made using a manual wax-resist dyeing technique. The word batik is thought to be derived from the word ‘ambatik’ which means a cloth with little dots with the suffix ‘tik’ meaning little dot, drop, point or to make dots. At the same time, batik may also originate from the Javanese word ‘tritik’ describing a resist process for dying where the patterns are reserved on the textiles by tying and sewing areas prior to dying – similar to tie dye techniques. Since batik will be undergoing numerous process of applying wax, dyeing, drying and removing the wax, a more colourful batik fabric indicates it has been through more of the process. To produce the pattern of figures that are desired, the process has to happen in a precise order along with the order of colours. Batik cloth is very versatile as it can be made into garments, paintings, scarves, bags, table cloths, bedspreads, curtains and other decorative items. Traditional batik is synonymous with silk or cotton. However, the re-introduction of natural dyes and technique has expanded the scope to include unexpected fabrics like chiffon, velvet, georgette, cheesecloth and voile mostly for fashion apparel. As for batik painting, the most commonly used fabrics are cotton and silk with fabrics such as poplin, voile, rayon, habotai silk, crepe de chine, jacquard and satin. Instead of being just a handicraft, batik has acquired the status of an art, a versatile medium that can be treated as an ideal hobby for an amateur or a medium of expression for an artist. Instead of being used for just dresses and tailored garments, modern batik is livelier and brighter in the form of murals, wall hangings, paintings, household linen and scarves. In the hands of a professional, batik can also make your house or office unique and inviting. Batik should also always be kept in clean, tidy, neat and regularly swept environment. In recent years, the Westerners have picked up an interest in batik painting, usually produced in the Canting technique, which has become a highly accomplished art form. Batik painting is a unique distinctive work of art like oil painting. Batik paintings can be further enhanced by using frames made of wood and rattan, wood-crafted hangers, light boxes, decorative sheets made of Perspex or glass and scrolls.

Until today, the batik’s true origin is still a mystery but what is sure is that batik is a very old form of art. Evidence of early batik has been found in the Middle East, Egypt, Peru, Japan, East Turkistan, Europe as well as India and China (Central Asia) 2000 years ago. Despite its ambiguous origins, batik reached its highest artistic expression in South East Asia, particularly in Indonesia and Malaysia. In the 17th century, Batik made its debut in Europe when the Dutch who colonized Java, Indonesia, introduced this art for to that part of the world. On October 2, 2009, UNESCO awarded Indonesian batik as a Masterpiece of Oral and Intangible Heritage of Humanity. As part of the acknowledgement, UNESCO insisted that Indonesia preserve their heritage. 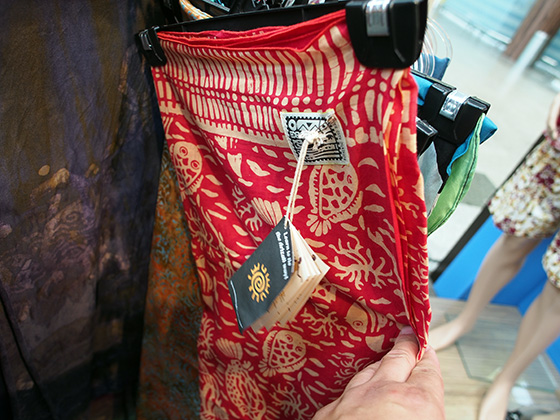 Javanese traditional batik, especially from Yogyakarta and Surakarta, has notable meanings rooted to the Javanese conceptualization of the universe. Their traditional colours, indigo, dark brown and white, represents the three major Hindu Gods, Brahma, Vishnu and Siva respectively. There are also certain patterns that are exclusive to nobles only while wider stripes or wavy lines of greater width indicated higher rank. So, based on the clothes they are wearing during Javanese ceremonies, one could determine the royal lineage of the person. As for the other regions of Indonesia, their own unique patterns usually derive from themes of everyday lives which incorporate patterns such as flowers, nature, animals, folklore or people. From the coastal cities of the northern Java, they have their own batik – pesisir batik – which is especially vibrant, influenced by Javanese, Arab, Chinese and Dutch cultures.

Batik is priced on the quality of the art work, craftsmanship and fabric quality. You can get fake poor quality batik at several dollars, or finest batik tulis halus, which probably took months to make, for several thousand dollars. Batik tulis has both sides of the cloth ornamented. In Indonesia, batik is traditionally sold in 2.25-metre lengths used for kain panjang or sarong for kebaya dress. It can also be worn by wrapping it around the body. Batik garments play a central role in certain rituals, such as the ceremonial casting of royal batik into a volcano, Javanese naloni mitoni ‘first pregnancy’ ceremony, tedak siten ceremony when a child touches the earth for the first time, as well as part of the labuhan ceremony when people gather at a beach to throw their problems away into the sea.

Batik popularity in Indonesia has its ups and downs. Historically, batik was essential for ceremonial costumes and worn as part of a kebaya dress every day. However, people chose fashionable western clothes starting 1960s, almost destroying the batik industry. Fortunately, thanks to the Indonesian fashion designers who decided to innovate batik by incorporating new colours, fabrics and patterns, batik was somewhat revived in the 21st century. Wearing batik every Friday is then encouraged in all government offices and private companies ever since 2009, after Indonesian batik got an award by UNESCO.

Malaysia batik can be found on the east coast of Malaysia such as Kelantan, Terengganu and Pahang while the batik in Johor shows Javanese and Sumatran influences. Malaysian batik usually do not display other motifs except plants and flowers, except butterfly theme, to avoid the interpretation of human and animal images as idolatry, in accordance with local Islamic doctrine. Malaysian batik is famous for its geometrical designs and different from Indonesian Javanese batik in the sense that the pattern is larger and simpler relying heavily on the brush painting method instead of canting to apply colour to fabric. Compared to the deep coloured Javanese batik, Malaysian batik is lighter and more vibrant. There are also batik from Thailand, Azerbaijan and China.

There are mainly 3 batik production techniques. The first process sees the outlining of the designs using a canting, a metal pen tool filled with hot wax. Colours are then painted on the cloth and the process of the waxing, dyeing and boiling will be followed till desired results are obtained. Depending on the intricacy of the pattern, the process can take up to weeks. Second method is the cap (block printing) where wax will be applied directly onto the cloth using soldered tin or copper strips block impressed with certain designs. The block is placed into hot wax and hand stamped onto the fabric. After dyeing the fabric and removing the wax, you will be able to see the pattern. Other than block printing, another mass production technique to keep up with the demand is silk screening. In this method, different screens are used according to the colours and patterns desired. Then, wax will be applied onto the cloth using these screens. A great place to see Malaysia-made Batik is at the National Textile Museum in Kuala Lumpur (26, Jalan Sultan Hishamuddin). Throughout Malaysia you will encounter numerous Batik Boutique’s, where you can buy the most stunning pieces of fabric. Another place to buy (authentic) Batik is at pretty much all Malaysian airports (like Malaysian Craft at Langkawi Airport).