Beside the splendid waterfall at the Seven Wells in the northwestern part of the island Langkawi there are also some other beautiful waterfalls in the same region. During a bicycle excursion from the Burau Bay area to the resort The Andaman, we came across a splendid but rather hidden waterfall. This particular waterfall named Temurun can be found in close proximity of Datai Beach, in the northern part of the island. Temurun is a 40 meters high waterfall; below is a small pond where you can swim in the refreshing water. The local population of the island frequently heads off to this waterfall after work or after school. Especially during weekends it can be somewhat crowded, although it is never really swarmed with people. Walking the stairs up to the waterfall is less strenuous then the other popular waterfalls (Seven Wells and Durian Fall). There is a small cabin where you can change into your trunks or bathing suit. 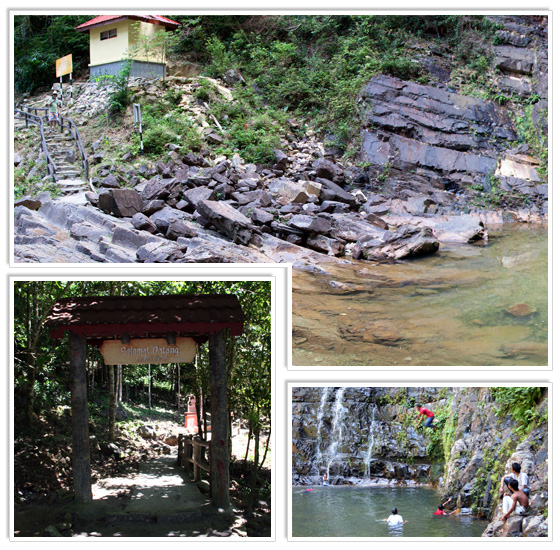 Instead of riding a bike you can also rent a moped or simply take a taxi to the waterfall. If you tell the driver you want to be picked up after a couple of hours, he will be there waiting for you. Keep in mind that not every taxi driver knows the exact location of the waterfall, but if you tell him to drive to the Datai resort, you will pass it along the way (keep an eye open for the signs). The waterfall is to the left of the road; the entrance can be found right next to the road. There is a small shop on the other side of the road where you can buy a drink or small snack.

Close to the Temurun Waterfall there’s also an artificial waterfall; Langkawi Waterfall. I never quite understood why this waterfall was ‘built’ as a tourist attraction. We went to Temurun a couple of times, and every time the Langkawi Waterfall was deserted and dried up. Langkawi government had great plans with this waterfall, but couldn’t turn it into a success in the end. Since you can climb to the top of the waterfall, you are able to take some pretty neat pictures.