A Tragic Tale at Mahsuri’s Tomb

When you come to the tomb in this modern time, chances are you’ll see how the island of Langkawi – where Mahsuri’s tomb is located – prospers dramatically. Be it the calming atmosphere, the scenic views of the island’s many beaches, the economic stability (the island is famous for its duty free products), the influx of foreign travellers or the contemporary establishments, no one would have ever imagined that once upon a time, the island might as well be hell on earth. Since 200 years ago, when Mahsuri first cast her curse (which lasted for seven generations), Langkawi had never rest until the dawn of the 21st century; when the curse finally closed its curtain. Throughout the cursed seven centuries, everything went downhill. The kingdom of Langkawi was taken over by the Siamese. The paddy fields were burnt. A war erupted. Simply put, many bad things occurred. Everything is but peaceful.

But what exactly did happen that prompted sweet, innocent Mahsuri to put an evil curse on the entire island? It all started with a woman’s jealousy towards Mahsuri’s angelic beauty. Mahsuri’s youthful, attractive-yet-subtle appearance won the hearts of many men on that small island. A lot of men tried to steal her heart, but she gave her heart to a warrior named Wan Darus. As it was his duty as a fight warrior, he went off to war, leaving Mahsuri behind to fend for herself. While her husband was away at war, Mahsuri developed a friendship with a young man called Deraman. A jealous woman, who was the wife of the village chief, took this as an opportunity to spread vicious rumours about Mahsuri’s infidelity. Soon, all hell broke loose. The angry villagers captured Mahsuri and tied her to a pole. 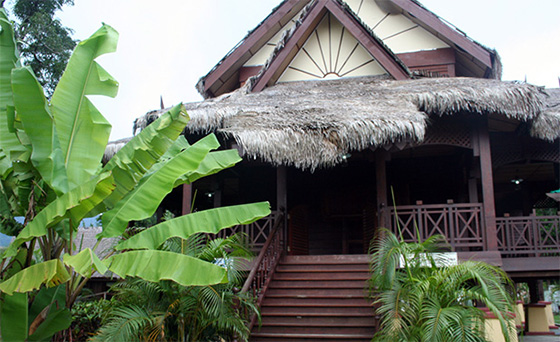 For some inexplicable reason, every execution attempted toward Mahsuri failed. They tried to stab her to death but nothing happened. Eventually Mahsuri told them to kill her with her family’s keris (asymmetrical dagger, an ancient Malay weapon). Finally it did work, and Mahsuri bled white blood, much to everyone’s surprise. The white-coloured blood showed her innocence in the uncalled allegation. Unfortunately damage has been done. It was at this moment when the dying Mahsuri, in her last breath, puts a curse on the island, which lasted for seven consecutive centuries. 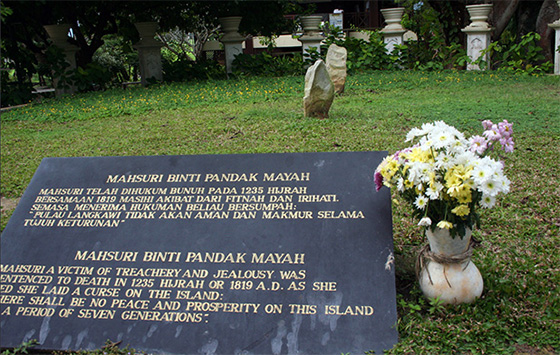 Ever since the curse, Langkawi was never the same again. Decades of many disasters such as invaded territories and failed crops following Mahsuri’s death caused distress in many. Langkawi finally reigned again once the seventh generation has come by. It was not until the year 2000 that people discovered the seventh descendant of Mahsuri named Sirintra Yayee. Perhaps the legend is real after all, given the fact that Mahsuri had descendants and a tomb to begin with (or was it all made up to boost the island’s image for tourism purpose?).

Tragic tales aside, there are plenty of things that you could do at Mahsuri’s Tomb (or locally known as Makam Mahsuri). Facilities at Makam Mahsuri include the Music Room (where you could try play the traditional instrument called Caklempong or watch a special performance by Malay ladies in traditional costumes playing folk music), Audio Visual Room (where a video presentation takes place and the story of Mahsuri is narrated. The story is also written on boards that you can read), gift shop, café and food stalls, Old Traditional Malay House (where you could experience first-hand how it feels like to live in such a house; complete with furniture and household items of the yesteryears) and Mahsuri’s Life Museum (where large dioramas have been created by artists to depict the story of Mahsuri. This museum also houses many different Malay household and farming items of the era. There is a section which displays the weapons used to kill Mahsuri. Cultural performances are held in the complex on Fridays and Saturdays). All in all, Langkawi is one lively, legendary island filled with beautiful scenery and interesting stories not to be missed.

How to get to Mahsuri’s Tomb

Admission fee for adults is RM10 for foreign tourists and RM5 for Malaysians with an ID. The ticket price for non-local children (age 3-12) is RM5 and RM2.50 for local Malaysian children.

Got any good tips to share with us? Do you know of any great things to do in Langkawi, or tips on the best places to eat? Let us know by leaving a reply below!