According to history, Queen Victoria has granted a land for the Thai temple to be built in 1845 and even until this day about over a hundred years later, the Thai temple still attracts throngs of devotees and visitors alike, both local and from abroad. 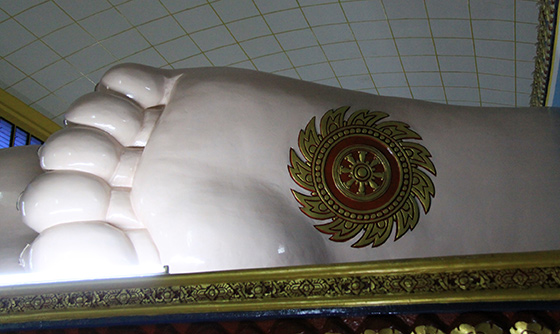 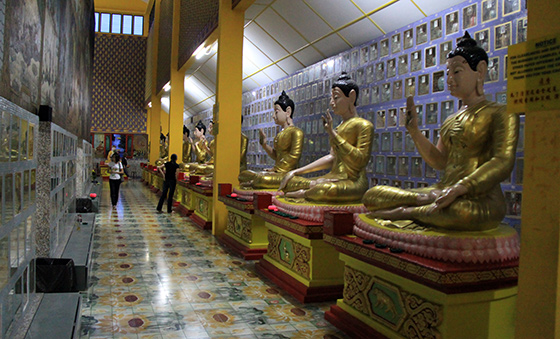 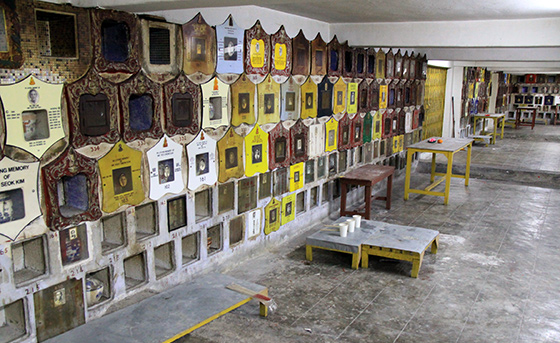 With great detail in its architecture, the temple and the reclining Buddha within is definitely worth a visit. The temple opens from 6am to 5.30pm daily and the entrance is free but it is always great to donate to contribute to the upkeep of the temple. There are also books for sale here where proceeds will go towards the temple’s funds. 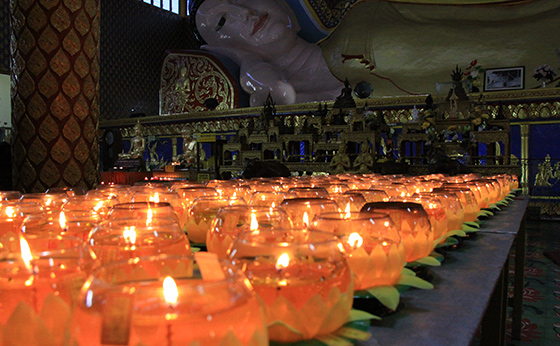 This colorful Thai temple is situated just across a Burmese Temple. As you set foot into the grounds of Wat Chayamangkalaram, two ‘guards’ of two mythical dragon-headed serpents on their feet greet and welcome you into the temple. Upon looking around the temple, you will see that the temple grounds have many shrines along with brightly colored statues of Devas as well as other mythical creatures in Buddhism mythology. 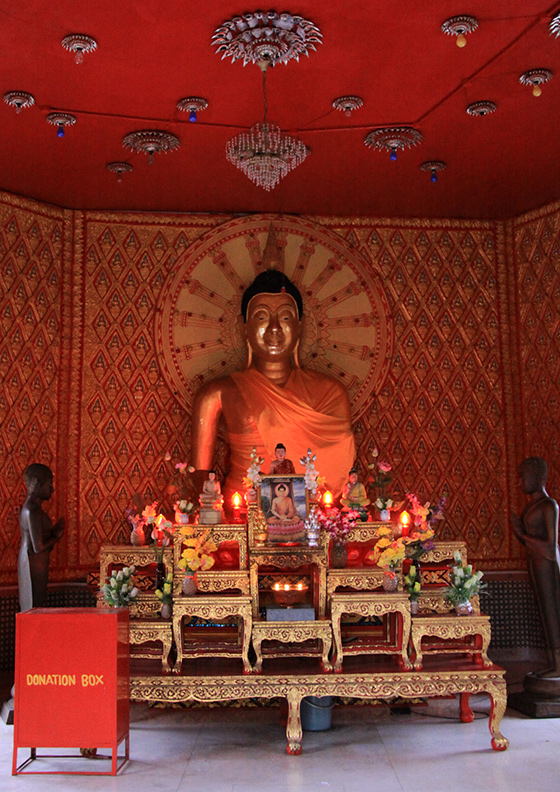 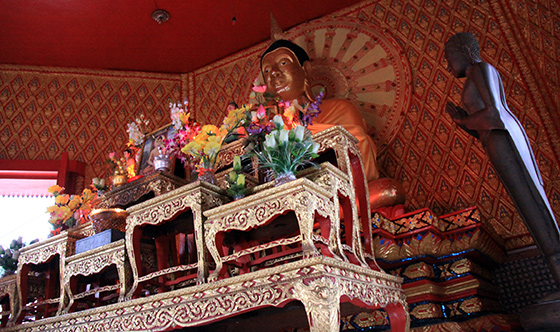 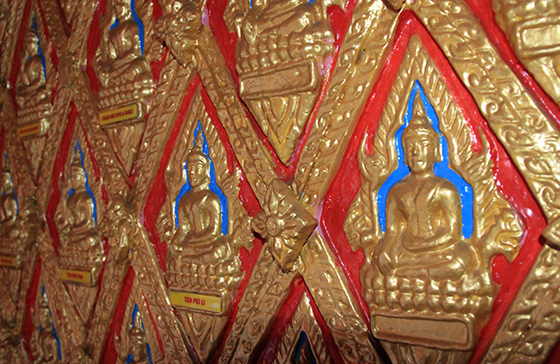 As you walk further inside the pagoda, you’ll find a gold-plated statue of the Reclining Buddha and upon walking behind the statue, you will see plenty of urns containing the ashes of devotees behind the statue. With a peaceful and smiling face, this Buddha lies on his right side with his head resting in the palm of his right hand. 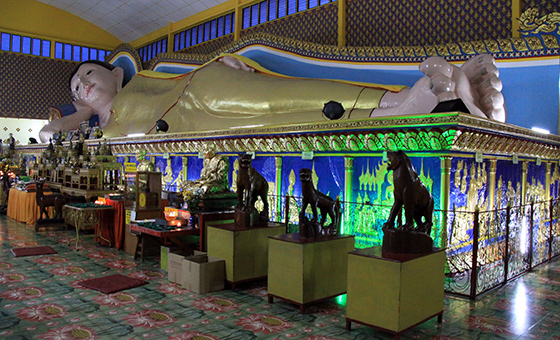 The reclining Buddha represents the historical Buddha at his death. It is said that the Buddha knew death was approaching and asked his disciples to prepare a couch for him in a grove. Having a unique blend of Chinese, Thai and Burmese architectural designs and was built in the 19th century and declared open in 1956 by Thai King Bhumipol Ayudayej, Wat Chayamangkalaram even has the 12 idols representing the animals in the Chinese zodiac. As the Reclining Buddha is simply a majestic sight, you could take a picture with the statue as visitors are given the permission for photography. Remember to take your shoes off before entering the temple and respect the monks who go about the temple with their religious duties. 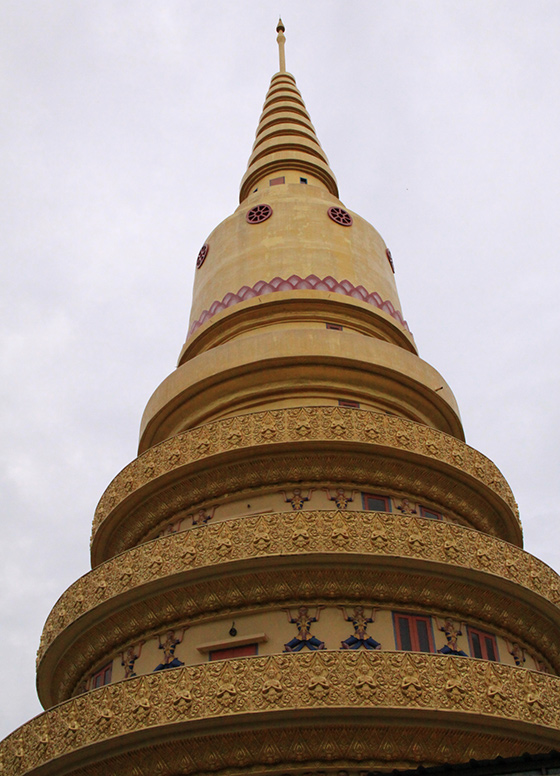 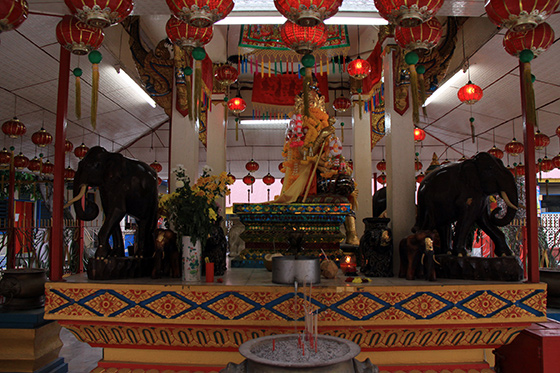 How to get to Wat Chayamangkalaram Thai Buddhist Temple

To get to the temple, there’s an easy RapidPG bus ride from the center of Georgetown. Be sure to take the one that’s heading to Burma Road (bus number 103 should take you there). Every taxi driver knows the place, but it might be difficult finding a driver that agrees on using the meter. If you are exploring Penang by rental car, you can park it directly in front of the temple. When you leave a parking guy comes to collect a few ringgits. 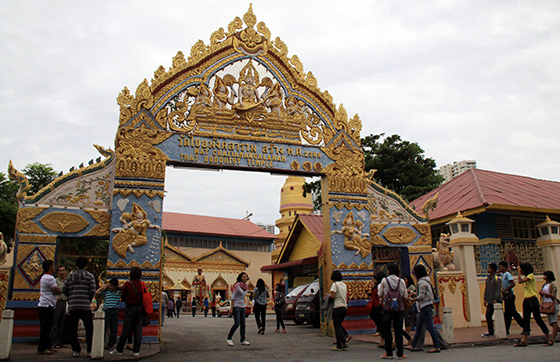 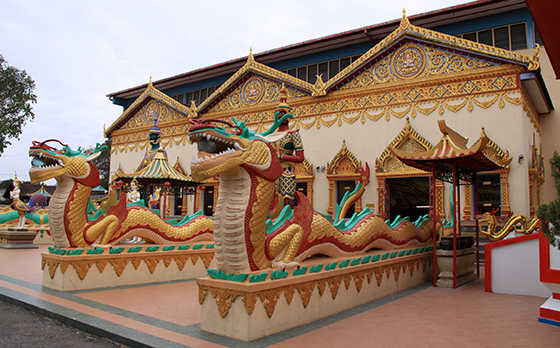 The temple is op daily between 6.00am and 5:30pm and the entrance is free. The best time of the day to visit the temple is early in the morning before other tourists arrive. We had a fantastic time at the temple, as we were almost the only ones there (around 7.30/8am). While you are there, you could also head to Dhammikarama, a Burmese temple just a stone’s throw away (directly opposite the Thai Temple), for another dose of learning. During Buddhist festivals like Wesak Day (in May) it is especially interesting and fun to visit both temples.

Got any good tips to share with us? Do you know of any great things to do in Penang, or tips on the best places to eat? Let us know by leaving a reply below!