Now you can travel for free between Suria KLCC and Bukit Bintang, and between Bukit Bintang and Chinatown! There’s even free on board Wi-Fi.

GOKL free city bus service is meant to serve the Kuala Lumpur Central Business District (CBD). It was launched to help improve public mobility in the areas KLCC, Bukit Bintang and Chinatown in Kuala Lumpur. Tourists will love the new bus service, as it provides an alternative to the high taxi prices in and around KLCC. Often taxi drivers in this area of KL are reluctant to drive on the meter. Tourists pay fixed prices which sometimes are ten times higher than what it should have been when driving on the meter. The free city bus service has been in operation since August 31, 2012 and it serves two main routes called the Green and Purple Line. Travelers can hop on and off at numerous official GOKL City Bus stops, many of these located conveniently near attractions, shopping malls, f&b areas or connecting modes of transport (like the monorail and LRT). 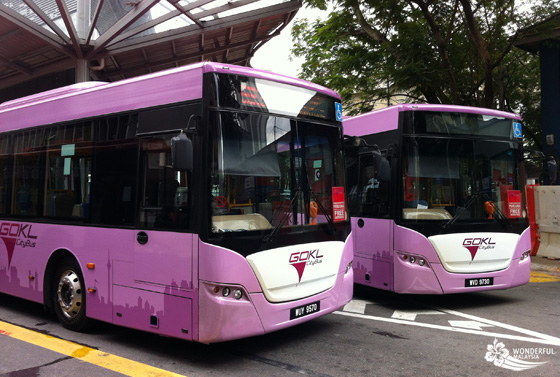 The Green Line commutes between KLCC and Bukit Bintang. Besides the newly opened pedestrian sky tunnel, travelers now have a second option to travel from one section of the center of KL to the other. This bus route has a stop in front of Suria KLCC (where you also have the iconic Petronas Twin Towers) and Starhill/Pavilion KL (along Bukit Bintang) and numerous other interesting stops along the way. For example, stop nr.5 is in front of the entry road towards the KL Tower, a popular attraction in KL. There is also a stop near Lot10 and Sungei Wang, right smack in the middle of Bukit Bintang. The Purple Line takes travelers from the Bukit Bintang area to Chinatown and back. You can get on the bus in front of Pavilion KL, and you can get out at the Central Market, or directly in Chinatown. Travelers that arrive (or depart) by bus at Pudu Sentral can use the Purple Line to travel free of charge to the Bukit Bintang and KLCC area. There currently are a total of 15 buses on the GO-KL service and each can accommodate up to 60 people per bus. Outside of rush hours there should be a bus every five to fifteen minutes. Each bus will provide easy accessibility for the disabled, such as wheelchair ramps. Free Wi-Fi is provided for the convenience of tech savvy travelers. The GOKL bus service operates between 6am and 11pm daily. All in all this new service is a great development for KL citizens, but also for foreign tourists. The bus routes are located within areas where there normally weren’t that many alternative ways to travel besides the – often expensive – taxi. The stop at Bukit Bintang (Ain Arabia near Lot10 shopping mall) functions as a hub where you can switch lines seamlessly. There are plans to launch even more free GOKL bus routes in the near future.

You can download the .pdf with the current routes here.